Bee Bread, produced by worker honeybees, is a “ball of pollen.” But pollen is only one of the ingredients of the honeybee’s “pollen ball.” To make bee bread, the worker bees mix powdery flower pollen with honey/nectar and their own saliva. The result is pellets or small balls of one of the most nutritious foods on earth. Bee bread contains every known nutrient required by bees and human beings as well as most of the rest of the animal kingdom. 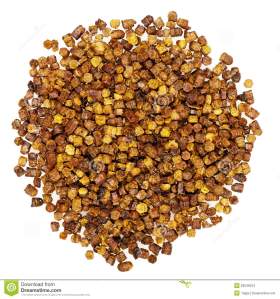 But, if “bee bread” is a good name, “pollen ball” isn’t quite so good. Why? Because the bees’ pollen ball contains a lot more than just pollen. In the past, when “bee pollen” was sold as a nutritional supplement for human beings.  “Bee pollen” meant “bee bread” – not just pollen but, also, the other ingredients added by worker bees.

Today, plain old pollen, the dust right off the plants and flowers, is often sold as a nutritional dietary supplement.  This, alone, isn’t a problem because pollen is quite nutritious.   But pollen, alone, has nothing like the nutritional value of those pellets of bee bread.

Unfortunately, that plain old pollen is often labeled “bee pollen” even though its never been near a bee.  Pollen that’s never been touched by a bee isn’t properly “bee pollen” or “bee bread.” So, read the ingredients on those supplement containers very carefully before buying “bee pollen” as a nutritional supplement. There is a huge difference, in terms of basic nutrients, between “bee bread” and just plain “pollen.”