There are already a number of hives called “urban beehives.”  One of the latest is a new design by Rowan Dunford, a graduate of New Zealand’s Auckland University of Technology.

The “urban beehive” concept has little to do with the basic hive used by traditional beekeepers.  Rather, the urban types are the members of a special class of “amateur” hives.  Though the newest “type” of them all, the number and variety of new ideas for urban hives seems to be exploding.

The urban beehive is designed for an urban-dwelling resident without the room for even a traditional amateur beehive.  Of course, these hives must be compact to accommodate the short space of an urban environment.  But, beyond providing some honey to the owner, it is hoped that the popularity of urban hives will encourage more beekeeping and  increase the populations of honey-producing bees throughout the world.

But back to Rowan Dunford’s “Urban Hive.”  The inner core of components are little different than the proven components of a standard commercial hive.  So, the buyer is assured a hive that works well for the bees as well as the beekeeper.

But, unlike the boxes (supers) of a traditional hive, the roof of each of Dunford’s boxes is plastic.  Not only do the plastic roofs protect the insect occupants from the elements, but these same tops can be removed and allow another box to be stacked on top.

So, “Dunford’s Urban” can change in size.  The individual “boxes” that compose this hive are, internally, similar to the boxes of a standard “top bar” hive.  But, the average urban-dweller doesn’t have the room to stack as many boxes as high as would a rural beekeeper.  So, the urban beekeeper can start with two boxes.  If a season’s experience is good, the owner can expand the size of their hive by adding more (modular) boxes – one on top of another.

Each box contains a number of “top bars” from which the bees will construct hanging combs.  The frames are spaced and sized carefully to encourage bees to build individual combs on each of the individual bars. 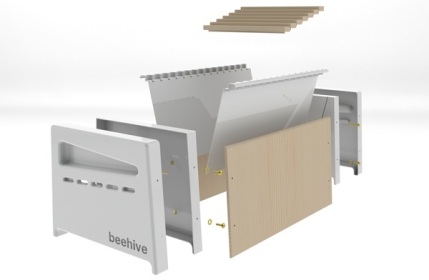